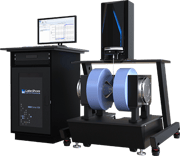 Two recently published papers highlight the utility of our 8600 Series VSM for magnetic materials research: one in support of the development of a magnetic micro-robot for possible medical applications, and the other relating to magnetic sensing technology.

This Scientific Reports article details the work of researchers in Lübeck, Germany who are developing a micro-robot that can be steered by magnetic fields in-vitro for interventional treatment of human cerebral aneurysms. As described in the paper, the researchers navigated the micro-robot through an additively manufactured “phantom” of a cerebral aneurysm with actuation and visualization performed using a magnetic particle imaging (MPI) scanner. The micro-robot was “painted with neodymium-iron-boron (NdFeB) particles to introduce a defined magnetic moment.” Our Model 8607 VSM system was specifically employed to acquire the magnetization curve of the micro-robot with a field of up to 1.5 T applied, in turn, showing superposition of paramagnetic and ferromagnetic behavior.

In this MDPI Materials 2021 journal paper, researchers from Yokohama National University and Nanjing Vocational University of Industry Technology used the 8600 Series VSM to evaluate the magnetic reversal properties of Wiegand wire, with potential use as a component of Wiegand effect power-generating sensors. The wire has both soft and hard regions and, as noted by the authors, the magnetic structure of the wires “cannot be evaluated using conventional magnetization hysteresis curves.” Therefore, in addition to our VSM being employed to measure major and minor hysteresis loops, it was used to measure first-order reversal curves (FORCs), which provided insight into the magnetic interactions within the two-layer structure (with FORCinel software used to calculate FORC distributions and plotting of the FORC diagrams). “As the Wiegand wire comprises components with different magnetic properties and interactions, FORC analysis is an effective method to further investigate and clarify its magnetic properties,” the authors concluded*.

* Also, in their acknowledgments, the authors expressed "thanks for the advice from Satoshi Okamoto from Tohoku University, Japan, and for the technical support provided by Brad Dodrill from Lake Shore, USA."

Did you know the 8600 Series VSM was created with FORC measurement as a primary objective?

FORC analysis is greatly enhanced by the high sensitivity, fast field sweep rates (1 T/s), and data point acquisition speed of the system, with the VSM able to

← Why is my dilution refrigerator not getting to base temperature?
FastHall Station aids wide-bandgap semiconductor research at Georgia Tech →