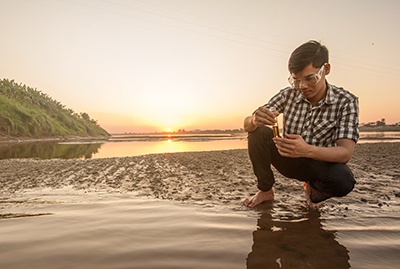 We have blogged about how Lake Shore VSMs have been used in biomedical research. Lately, we have also taken note of the amount of research involving the use of magnetic nanoparticles for improved water treatment applications, yet another area of research where the development of magnetic nanotechnology can influence the lives of everyone.

Innovations like these, when commercialized, will play an important role as demand for fresh water increases globally. One specific area of research interest involves using magnetic sorbents for removal of heavy metals and other contaminates from water, surpassing what’s currently possible using existing filtration methods for industrial and municipal wastewater remediation. Certain types of material particles can be engineered to interact with and bind to contaminants, enabling them to become metal catalysts. In turn, when an external magnetic ﬁeld is applied, the contaminants can be separated during the water treatment process for reduced environmental impact. Much work has been done in this field, with scientists exploring the synthesis and coating of various nanoscale materials for increased adsorption capacity. Lake Shore’s VSM technology has assisted in the characterization of such materials, primarily to confirm that the corresponding saturation magnetization (Ms) of the materials is large enough to enable magnetic separation. For example, over the past year, published papers have referenced VSMs used in the following applications:

As noted above, most research involved the use of either our 7300 or 7400 Series VSMs. We are curious to see how the new 8600 Series VSM might aid in future study of magnetic materials for improved water purification applications. There are reasons to believe it will, mainly because the many types of nanomaterials being studied exhibit subtle magnetic properties with very low magnetic moment, requiring significantly greater VSM sensitivity for the measurement. The 8600 Series provides such sensitivity (down to 25 nemu)—in fact, when compared with our 7400 Series, it offers (conservatively) a 4× improvement in moment sensitivity, enabling the researcher to make measurements faster and on materials that are more magnetically diluted.

In addition, some material sorbents being studied contain magnetic nanowire arrays. Inter-wire coupling is one of the most important effects in nanowire arrays because it significantly affects magnetic properties. To study inter-wire coupling, one must characterize interactions and coercivity distributions in these arrays, which is not possible from a hysteresis loop measurement alone. First-order-reversal-curve (FORC) measurements and analysis provide a means for studying the magnetic interactions and coercivity distributions in these materials. A typical series of FORCs contain thousands to tens of thousands of data points and thus measurement sensitivity and speed is important. The 8600 Series VSM features ramp rates to 10 kOe/s and data acquisition rates as fast as 10 ms/point, so complex FORC data collection sequences can be acquired in a fraction of the time required on previous systems.

← Sensor packaging information expanded on www.lakeshore.com
App note on use of Model 372 scanners for either ultra-low temperature or resistance measurements →