From time to time, we like to highlight how our cryogenic probe stations are being used in interesting research. Our latest application focus is on work led by the University of Akron and published in last month’s IEEE Transactions on Microwave Theory and Techniques. Along with researchers from the U.S. Army and Nano-C Inc., a Westwood, MA developer of nanostructured carbon materials and their applications, Michael Gasper and Dr. Ryan Toonen of UA’s ZEN-Lab have developed a novel RF bolometer using a CNT thin film as the thermistor element. 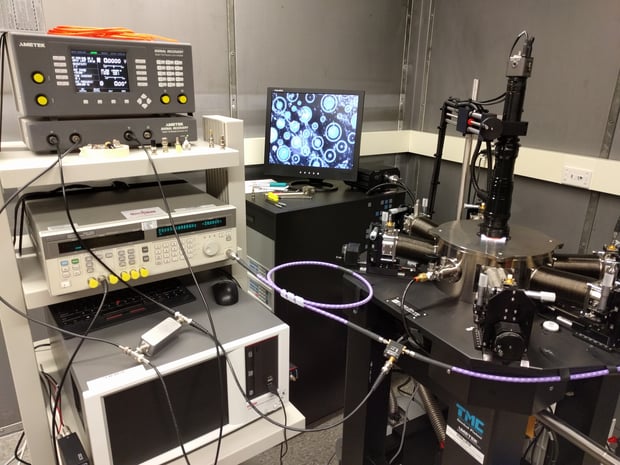 Conventionally, highly-sensitive CNT bolometers have been fabricated with a single CNT using costly electron beam lithography. In this highlighted work, the research team utilized a wafer-scale CNT film deposited on a sapphire substrate and traditional microfabrication techniques to economize and scale fabrication of CNT thermistors. The thinking is, bolometers created using this technology could result in lower-cost, simpler-to-produce RF power-sensing solutions for remote sensing applications.

Lake Shore’s probe station played a role in determining how the sensitivity of the bolometer would change when the device was cooled to cryogenic temperatures. Specifically, experiments were performed in a CPX-VF probe station outfitted with 67-GHz GSG microwave probe arms. At 80 K, the research team observed a six-fold increase in sensitivity (2.3 mV/mW) compared to a room temperature bolometer.

Also worth noting: ZEN-Lab researchers are currently using their CPX-VF for similar experiments, concentrating more recently on the development of a microwave power detector using commercially-available CVD-grown graphene. This work, which was presented in July at the IEEE International Conference on Nanotechnology, should be accessible via IEEE Xplore® in the coming month.

Learn more about Lake Shore probe stations and the CPX-VF as well as our THz on-wafer cryogenic probing arm for characterizing devices at frequencies of 75 GHz and up.

The lock-in amplifier explained and reimagined

The technology behind the M81-SSM’s precise signal synchronization