A paper just published in the Proceedings of the National Academy of Sciences of the United States describing the study of magnetofossils as environmental change biomarkers references the use of a Lake Shore 8600 Series VSM for determining a special magnetic signature of the magnetofossil samples.

Giant magnetofossils, the preserved remains of magnetotactic bacteria and other iron-biomineralizing microbes, have thus far been found exclusively in sediments associated with ancient greenhouse climates, suggesting that they are indicators of environmental disturbance. Previously, identifying giant magnetofossils has required destructive extraction techniques.

The results suggest that the high-coercivity signature identified by the authors comes from giant, needle-shaped magnetofossils in situ. This signature could be used to non-destructively detect giant magnetofossils in bulk sediment samples via magnetic measurements, according to the authors. The ability to rapidly detect these fossils in the geological record could help to determine the physiology and ecology of the organisms that produce the fossils, and to identify periods of substantial environmental change. 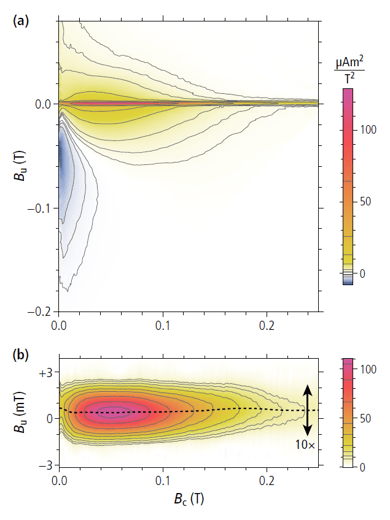 Figure legend: (a) Low-noise, high-resolution FORC diagram of the magnetofossil-bearing sample WL35950b, obtained with a Lake Shore 8600 Series VSM. The saturation magnetic moment is 0.41 µAm2. (b) Central ridge isolated from (a), with 10× vertical exaggeration. The dashed line represents the ridge’s vertical offset. The offset maximum at ~0.18 T represents the signatures of giant needles. Figure courtesy of Ramon Egli.

Near-shore marine sediments deposited during the Paleocene–Eocene Thermal Maximum at Wilson Lake, N.J., contain abundant conventional and giant magnetofossils. We find that giant, needle-shaped magnetofossils from Wilson Lake produce distinct magnetic signatures in low-noise, high-resolution first-order reversal curve (FORC) measurements. These magnetic measurements on bulk sediment samples identify the presence of giant, needle-shaped magnetofossils. Our results are supported by micromagnetic simulations of giant needle morphologies measured from transmission electron micrographs of magnetic extracts from Wilson Lake sediments. These simulations underscore the single-domain characteristics and the large magnetic coercivity associated with the extreme crystal elongation of giant needles. Giant magnetofossils have so far only been identified in sediments deposited during global hyperthermal events and therefore may serve as magnetic biomarkers of environmental disturbances. Our results show that FORC measurements are a nondestructive method for identifying giant magnetofossil assemblages in bulk sediments, which will help test their ecology and significance with respect to environmental change.

A modified FORC protocol on the 8600 Series VSM was used in this study to resolve a small offset of the so-called central ridge (about 0.5 to 0.7 mT) caused by thermal relaxation effects on single-domain particles and the asymmetric timing between ramping from positive saturation down to the reversal field (fast), and FORC measurements from the reversal field back to positive saturation (slow).