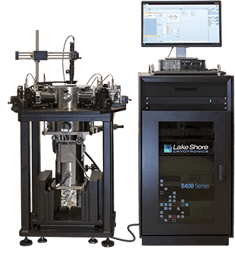 In this study, Fe3O4 nanoparticle arrays were assembled on wafer-level graphene Hall bar and van der Pauw devices, and the magneto-transport properties measured under high vacuum and at temperatures ranging from 10 to 350 K in the 8425 system. Four or six individually positioned probes were landed on individual devices within the system’s probing environment, and automated Hall measurements were carried out over field, temperature, and gate bias. Here, the AHE signature in these devices could only be observed in proximity to the Dirac point. This effect was revealed by varying a backside gate bias, which was applied using a triaxial sample stage in conjunction with the platform's integrated gate bias option.

This novel, nano-particle inducted AHE had to be substantiated by comparing the Hall characteristics across multiple control and processed graphene devices. Probing measurements greatly enhanced the efficiency of these comparisons by eliminating the need to solder, wire bond, or epoxy wires to each device.

For more about the 8425 system, including the integrated software for system operation, data acquisition, and analysis, see our product page.